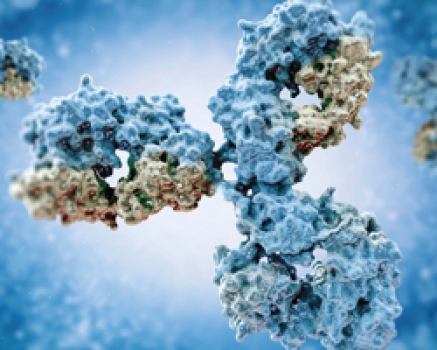 Antibodies, or immunoglobulins, are produced by B lymphocytes during the adaptive immune response. Following secretion, they bind with an extremely high degree of specificity to the foreign antigen which stimulated their production. This functions to protect the host from harm by, for example...

Antibodies, or immunoglobulins, are produced by B lymphocytes during the adaptive immune response. Following secretion, they bind with an extremely high degree of specificity to the foreign antigen which stimulated their production. This functions to protect the host from harm by, for example, marking invading pathogens for destruction or preventing viruses from attaching to host cell receptors. Their highly specialised binding makes antibodies a hugely powerful research tool, and they have been used for decades in a wide variety of immunodetection techniques including Western blotting, immunocytochemistry, immunohistochemistry (IHC), flow cytometry, ELISA and lateral flow assays to name just a few.

During a typical immunodetection assay, the process begins with incubation in a blocking agent to minimise non-specific binding, before the addition of a primary antibody that binds specifically to the target antigen. Following this step, any unbound antibody is removed by washing, and a secondary antibody is then used for detection. The secondary reagent is most commonly an anti-species antibody which has been raised against the host species of the primary antibody, and is usually conjugated to a detection moiety such as a fluorophore or an enzyme to allow confirmation of the presence of the antigen in the test sample.

FIG Antibody binding in a competitive ELISA, a form of immunodetection. In this example, the target antigen has been captured on the surface of a microplate. Its presence is confirmed through the binding of an antigen-specific primary antibody, followed by the addition of a labelled secondary antibody. If the test sample were to contain the antigen, a reduction in signal would be seen since the primary antibody would bind to this and be removed from the assay during subsequent wash steps, rather than becoming attached to the microplate.

Any primary antibody which is used for immunodetection should demonstrate several key properties. Firstly it is essential that is specific for the target antigen, since off-target binding can lead to misinterpretation of results. It is often a good idea to use relevant positive and negative controls to confirm that the antibody produces the expected pattern of staining, and antibody manufacturers will often provide this data; positive controls may include Western blot data generated against recombinant proteins or lysates from cell lines known to express high levels of the target antigen, whereas negative controls might be microscopy images from plated cells which have been treated with siRNA. Secondly, it is often helpful to check the antibody’s sensitivity, especially if the test samples are likely to contain only low levels of the target antigen; this can easily be carried out by performing a titration.

It is also a good idea to consider whether a monoclonal or a polyclonal antibody will be more suitable for the assay. Monoclonal antibodies recognise a single antigenic epitope, and are often preferred since an unlimited antibody supply can be guaranteed for the lifetime of the assay, yet they are only suitable for a sandwich assay format if the other antibody in the sandwich does not bind the same epitope. Polyclonal antibodies afford signal amplification since these preparations consist of a population of antibodies which recognise multiple epitopes, however they can be subject to lot to lot variability.

Biozol offers an extensive range of high quality primary and secondary antibodies, which can easily be searched on the basis of species reactivity, application, clonality, host species, isotype and manufacturer using the selectable filters. In many cases antibody validation data can be found on the product datasheet, often generated in multiple applications, while details of the immunogen are frequently provided alongside information regarding the epitope where this has been mapped. Our product portfolio also includes primary antibodies which have been directly conjugated to fluorophore or enzyme tags; these reagents are ideally suited to applications in which it is undesirable to incorporate a secondary antibody incubation step.

If you do not find what you are looking for yourself, we will be happy to help you personally: simply submit a product search request via our form and we will find an individual solution for you. We can meet special requests by custom antibody synthesis.