The exciting review of Leca et al. (2021) summarizes the role of the Krebs cycle key enzyme IDH in the cross-talk between tumor metabolism and immunity in IDH-mutated cancers and shades light on its relevance in immunotherapeutic approaches of IDH-mutant cancers.

Background: IDH is of central importance for the energy metabolism of the cell. IDH1 and 2 are mutated in numerous cancers and lead to the accumulation of the "oncometabolite" 2-hydroxyglutarate (2-HG), which directly influences tumor metabolism and "tumorigenesis". IDH1 mutations have important significance in the diagnosis of gliomas and also play a diagnostic role in leukemias.

Diagnostic role: The 2016 WHO Classification of Tumors of the Central Nervous Systems recommends initial immunohistochemical assessment of the IDH1 R132H mutation prior to further molecular pathologic analysis. The IDH1 antibody clone H09 developed at DKFZ in Heidelberg is the gold standard and is distributed under exclusive license from Dianova (DNA-DIA-H09).

Therapeutic potential: Inhibition of mutant IDH1 to avoid accumulation of oncometabolites like 2-HG (2-hydroxyglutarate) has been evaluated as promising target to directly affect tumor-progression (Dang et al. 2009). In addition to 2-HG's well-known effects on tumor cells themselves, it has become increasingly clear that 2-HG directly influences the tumor microenvironment (TME). Studies on how IDH mutations affect functions of tumor-infiltrating immune cells in the TME may open an important route to new immunotherapeutic approaches to treat IDH-mutant cancers. 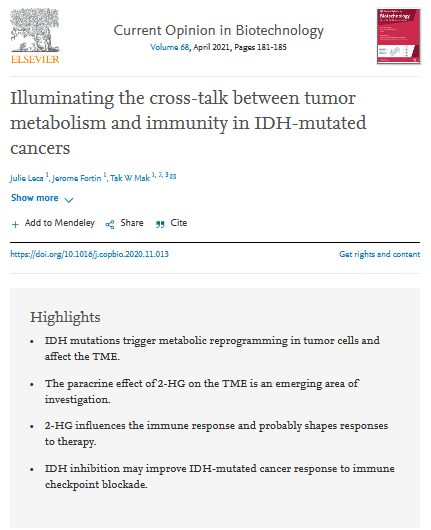