In-depth analysis of SARS-CoV-2 quasispecies is pivotal for a thorough understating of its
evolution during infection. The recent deployment of COVID-19 vaccines, which elicit pro-
tective anti-spike neutralizing antibodies, has stressed the importance of uncovering and
characterizing SARS-CoV-2 variants with mutated spike proteins. Sequencing databases
have allowed to follow the spread of SARS-CoV-2 variants that are circulating in the human
population, and several experimental platforms were developed to study these variants.
However, less is known about the SARS-CoV-2 variants that are developed in the respira-
tory system of the infected individual. To gain further insight on SARS-CoV-2 mutagenesis
during natural infection, we preformed single-genome sequencing of SARS-CoV-2 isolated
from nose-throat swabs of infected individuals. Interestingly, intra-host SARS-CoV-2 vari-
ants with mutated S genes or N genes were detected in all individuals who were analyzed.
These intra-host variants were present in low frequencies in the swab samples and were
rarely documented in current sequencing databases. Further examination of representative
spike variants identified by our analysis showed that these variants have impaired infectivity
capacity and that the mutated variants showed varied sensitivity to neutralization by conva-
lescent plasma and to plasma from vaccinated individuals. Notably, analysis of the plasma
neutralization activity against these variants showed that the L1197I mutation at the S2 sub-
unit of the spike can affect the plasma neutralization activity. Together, these results sug-
gest that SARS-CoV-2 intra-host variants should be further analyzed for a more thorough
characterization of potential circulating variants. 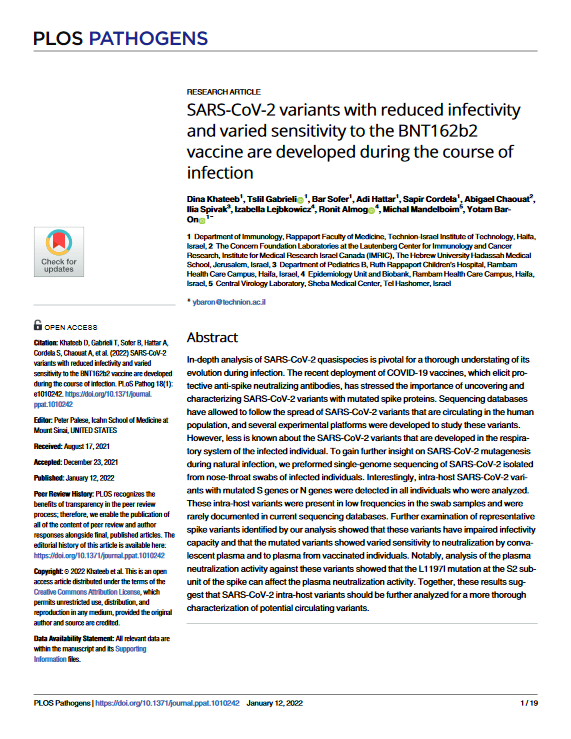