Glaucoma is a neurodegenerative disease in which the retinal ganglion cell axons of the optic nerve degenerate concomitant with synaptic changes in the retina, leading finally to death of the retinal ganglion cells (RGCs). Electrical stimulation has been used to improve neural regeneration in a variety of systems, including in diseases of the retina. Therefore, the focus of this study was to investigate whether transcorneal electrical stimulation (TES) in the DBA2/J mouse model of glaucoma could improve retinal or optic nerve pathology and serve as a minimally invasive treatment option. Mice (10 months-old) received 21 sessions of TES over 8 weeks, after which we evaluated RGC number, axon number, and anterograde axonal transport using histology and immunohistochemistry. To gain insight into the mechanism of proposed protection, we also evaluated inflammation by quantifying CD3+ T-cells and Iba1+ microglia; perturbations in metabolism were shown via the ratio pAMPK to AMPK, and changes in trophic support were tested using protein capillary electrophoresis. We found that TES resulted in RGC axon protection, a reduction in inflammatory cells and their activation, improved energy homeostasis, and a reduction of the cell death-associated p75NTR. Collectively, the data indicated that TES maintained axons, decreased inflammation, and increased trophic factor support, in the form of receptor presence and energy homeostasis, suggesting that electrical stimulation impacts several facets of the neurodegenerative process in glaucoma.

Genetex RBPMS antibody GTX118619 was applied in Western blot analysis in this study. 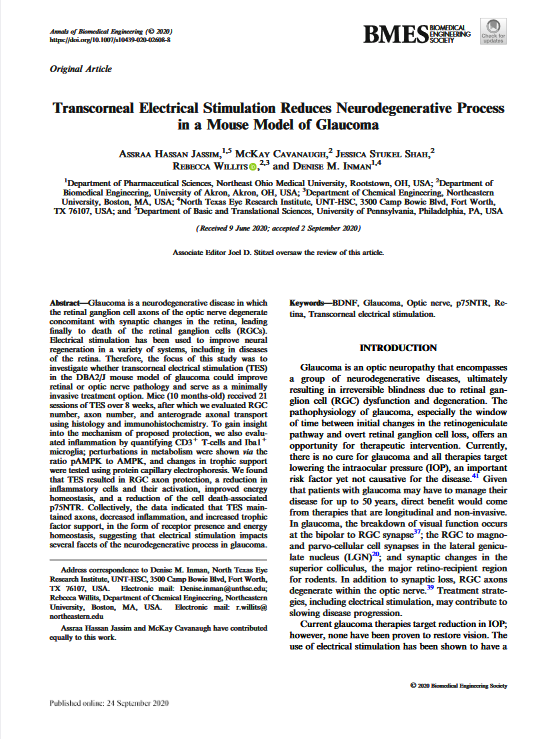