What has a German cockroach to do with allergen-specific immunotherapy, you may ask? Well, read the following article by Birrueta et al. and find out …

German cockroach extract is used clinically to evaluate allergen-specific sensitization and for subcutaneous allergen-specific immunotherapy, though there are no guidelines for standardization in its manufacture. We performed an immunological evaluation of 12 different cockroach extracts prepared from different sources and their potency to induce allergen-specific T cell reactivity. PBMC from 13 cockroach allergic donors were expanded in vitro with 12 different German cockroach extracts. After culture expansion, cells were re-stimulated with the different extracts and T cell responses were assessed by FluoroSpot (IL-5, IFNγ and IL-10 production). In parallel to the extracts, single allergen peptide pools for allergens from groups 1, 2, 4, 5, and 11 were tested to determine allergen immunodominance. Furthermore, to assess allergy specificity, PBMC from 13 non-allergic donors were also tested with the most potent extract and T cell responses were compared to the allergic cohort. Dramatic variations in T cell reactivity were observed to the different cockroach extract batches. Response magnitudes varied over 3 logs within a single donor. IL-5 production in the allergic cohort was significantly higher compared to the non-allergic cohort (p=0.004). Allergen content determination by ELISA detected much lower concentrations of Bla g 5 compared to Bla g 1 and 2. Mass spectrometric analysis revealed that Bla g 5 was present in similar amounts to Bla g 1 and 2 in extracts made from whole body, whereas it was not detected in extracts made from fecal matter, suggesting that Bla g 5 is not excreted into feces. Different donors exhibit different response patterns to different extracts, potentially dependent on the donor-specific T cell allergen immunodominance pattern and the allergen content of the extract tested. These findings have dramatic implications for the selection of potent extracts used for diagnostic purposes or allergen-specific immunotherapy. as it allowed the researchers to unravel the effect of the various extracts directly on T-cell activity.

An IFN-gamma/IL-10/IL-5 FluoroSpot assay was central to dissect the variable immune profiles among the donors, as it allowed the researchers to unravel the effect of the various extracts directly on T-cell activity. 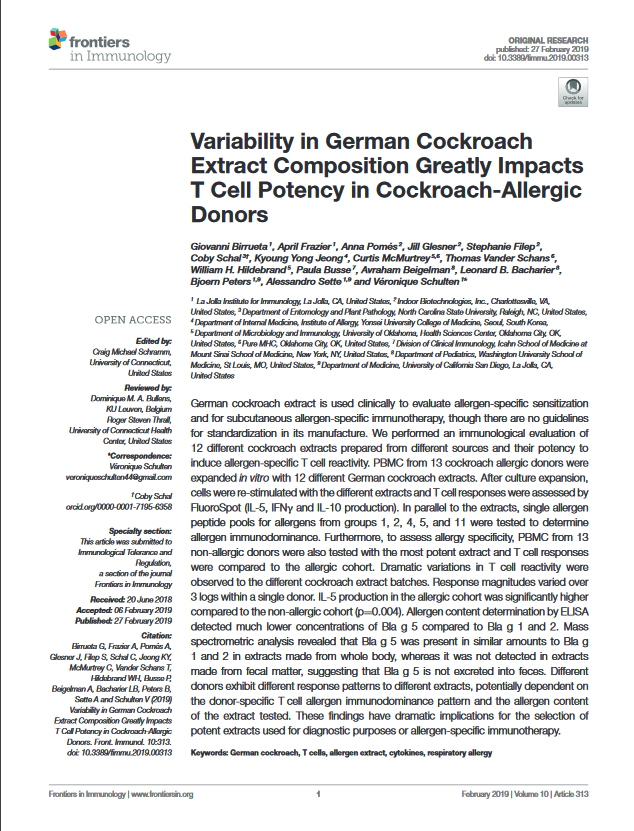