The signaling pathways that sustain the disease process of chronic rhinosinusitis with nasal polyps (CRSwNP) remain poorly understood. We sought to determine the expression levels of Wnt signaling genes in CRSwNP and to study the role of the Wnt pathway in inflammation and epithelial remodeling in the nasal mucosa. Microarrays and real time-quantitative polymerase chain reaction comparing gene expression in matched NPs and inferior turbinates revealed that WNT2B, WNT3A, WNT4, WNT7A, WNT7B, and FZD2 were up-regulated and that FZD1, LRP5, LRP6, and WIF1 were down-regulated in NPs. Immunolabeling showed robust expression of Wnt ligands, nuclear β-catenin, and Axin-2 in NP tissue, suggesting that Wnt/β-catenin signaling is activated in NPs. We used primary human nasal epithelial cell (HNEpC) cultures to test the functional consequences of Wnt pathway activation. Monolayer HNEpCs treated with recombinant human WNT (rhWNT) 3A, but not with rhWNT4, had altered epithelial morphology and decreased adhesion, without loss of viability. We found that neither rhWNT3A nor rhWNT4 treatment induced proliferation. The expression and release of inflammatory cytokines IL-6 and granulocyte-macrophage colony-stimulating factor were increased after rhWNT3A exposure of HNEpCs. When differentiated at an air-liquid interface, rhWNT3A- and WNT agonist-, but not rhWNT4-treated HNEpCs, had abnormal epithelial architecture, failed to undergo motile ciliogenesis, and had defective noncanonical Wnt (planar cell polarity) signaling. On the basis of these results, we propose a model in which Wnt/β-catenin signaling sustains mucosal inflammation and leads to a spectrum of changes consistent with those seen during epithelial remodeling in NPs.

Wnt3a Polyclonal Antibody by our partner Bioss Antibodies was used in this study for IHC staining of tissue cryosections. 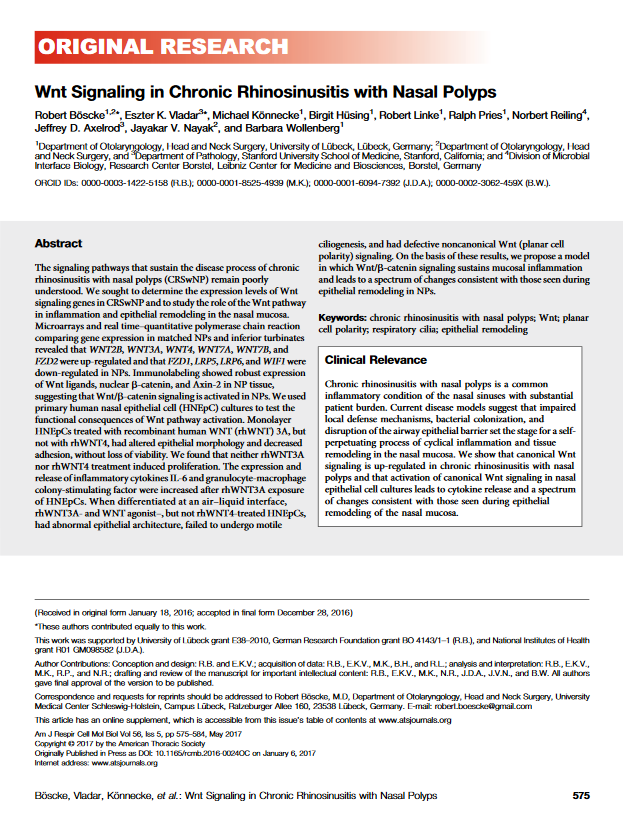