This paper presents a novel approach, based on the standard addition method, for overcoming the matrix effects that often hamper the accurate characterization of nanoparticles (NPs) in complex samples via single particle inductively coupled plasma mass spectrometry (SP-ICP-MS). In this approach, calibration of the particle size is performed by two different methods: (i) by spiking a suspension of NPs standards of known size containing the analyte, or (ii) by spiking the sample with ionic standards; either way, the measured sensitivity is used in combination with the transport efficiency (TE) for sizing the NPs. Moreover, such transport efficiency can be readily obtained from the data obtained via both calibration methods mentioned above, so that the particle number concentration can also be determined.

The addition of both ionic and NP standards can be performed on-line, by using a T-piece with two inlet lines of different dimensions. The smaller of the two is used for the standards, thus ensuring a constant and minimal sample dilution. As a result of the spiking of the samples, mixed histograms including the signal of the sample and that of the standards are obtained. However, the use of signal deconvolution approaches permits to extract the information, even in cases of signal populations overlapping.

For proofing the concept, characterization of a 50 nm AuNPs suspension prepared in three different media (i.e., deionized water, 5% ethanol, and 2.5% tetramethyl ammonium hydroxide-TMAH) was carried out. Accurate results were obtained in all cases, in spite of the matrix effects detected in some media. Overall, the approach proposed offers flexibility, so it can be adapted to different situations, but it might be specially indicated for samples for which the matrix is not fully known and/or dilution is not possible/recommended.

Ultra Uniform™ AuNPs and AgNPs manufactured by our partner nanoComposix are featured in this study. 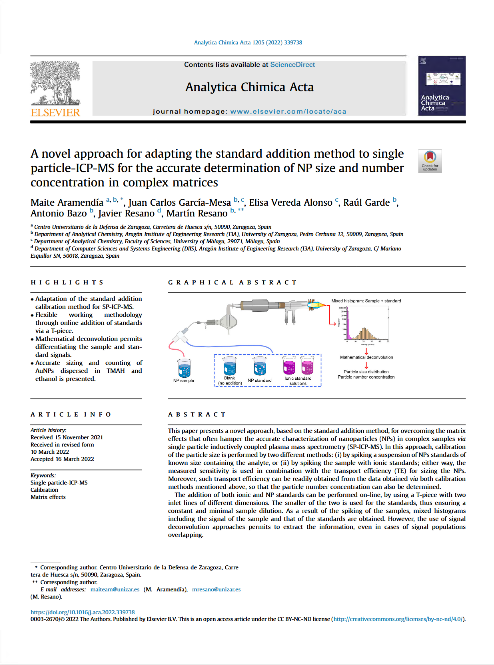