The SPHERO™ Calibration Particles are versatile, stable, economical and convenient to use. These particles contain a mixture of fluorochrome which are spectrally similar to many of the fluorochromes used in flow cytometry. As a result, they are used for routine alignment, day-to-day performance verification and long term performance tracking of several channels of flow cytometers in one run. These particles are very stable since the fluorochromes are entrapped inside the particles instead of being located on the surface. They are packaged in a convenient dropper bottle to facilitate the dispensing and storage. The diluted particles can be stored for later use if desired to reduce costs. These products and their uses are described briefly as follows:

New flow cytometers with an increasing number of fluorescent channels are now available. As a result, the Ultra Rainbow Calibration Particles with enhanced UV and Far Red fluorescence intensity have been designed for performance tracking of flow cytometers with multiple lasers. For example, the Ultra Rainbow Calibration Particles have excellent resolution in the UV, violet, green, yellow, orange, red, far red, and IR channels of the flow cytometer. The URCPs are available in 6 peaks, 3.8µm or 5.1µm.
These particles are similar to the RCPs since a calibration graph for the URCPs is obtained using the same procedure. However, the URCP have a broader excitation wavelength range and improved resoltuion in the UV and Far Red Channels. 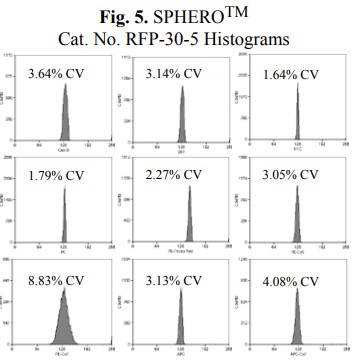 The Rainbow Fluorescent Particles (RFPs) contain uniform size particles with a single intensity. The single peak of the RFP has low fluorescence and size coefficient of variation (CV). As a result, they are useful in the alignment of the optical system of the flow cytometer in multiple channels. For example, Spherotech Catalog Number RFP-30-5 is used to align the FITC, PE, PETR, PE-Cy5, and APC channels of the flow cytometer. See Figure 5 for the histograms of Spherotech Cat. No. RFP-30-5. The RFPs contain similar fluorophores to the Rainbow Calibration Particles. In addition, the RFPs have similar fluorescence intensities to the brightest peak of the corresponding Rainbow Calibration Particles with the exception of RFP-50-5, RFP-60-5, RFP-100-2, and RFP30-5A. The RFP-30-5A has the fluorescence intensity similar to stained cells in all channels.

Select the link below to download the complete SpheroTECHNICAL NOTE. (PDF format) 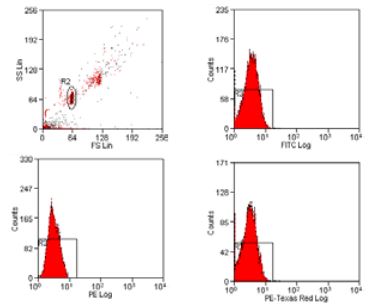